The Cheap Way to Sleep: Me

When my two best friends and I travel together, sharing a hotel room can be a challenge. Over the years, we've worked out a system for getting ready so that we have all the bathroom time we need to get pretty in a timely manner: Cher needs at least two hours to move through her very thorough and meticulous regiment: Lisa needs less time, but still adheres to a formula to produce her beauty, so she gets to shower second. Me? I can slap myself together in forty minutes, because well, I give far less of a shit what I look like than the other two.

What we haven't worked out is compromising on the sleeping atmosphere. Arrangement, we've got down: we reserve a two-bed room and one of us brings and aerobed. What we can't seem to get a handle on are setting the perfect conditions for each of us to get a good night's rest.

I need absolute darkness and silence in order to wind down; both of my BFFs need the noise and the light of the television. Because I'm out-numbered, I  have to lump it. We've tried shoving me in dark corners or angling the television screen away from me; nevertheless, I usually spend the night dozing on and off. (Trust me, when I win the lottery, marry rich, or start making money off this damn blog, I'll be reserving my own room.)

On one occasion I stood my ground and demanded they set the television on a timer so that I could enjoy some peace and quiet. They acquiesced by setting the timer for six fucking hours. I meant for it to be set for maybe two hours to give them enough time to go to sleep and leave me the dark and quiet I need to stay asleep.

I woke up at 4 a.m., the damn television still on: the Pavlovian gong of Law and Order echoing throughout the room. I lie there watching the stupid episode--one I'd seen around 25 times-- until I finally snatched up the remote and turned Jack McCoy's indigence off. Instantly, Cher and Lisa both shot up in bed like mummies or vampires rigged to pop out of a coffin in a haunted house. I swear their hands were formed like claws, and they bared their teeth at me.

I invited McCoy back into our bedroom. 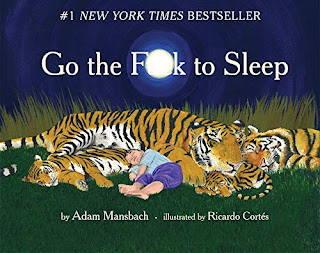 Getting a good night's rest is a challenge for most everyone; in fact, according to American Sleep Association (ASA), between 30-40% of adults struggle with sleeping. The ASA suggests adults get 7-9 hours of sleep. If a "children's" book called Go the Fuck to Sleep by Gilbert Mansbach and Ricardo Cortes gets nearly a five-star rating on Amazon and entices Samuel L. Jackson and Morgan Freeman to do a dramatic reading, feeling rested is a rarity.

We all have certain conditions for getting a good-night sleep. Regardless of over-booked and over-stressed lives that should guarantee at the end of the day, many still fight insomnia. Our bodies in hyper-drive in order to plow through our long days, our brains full of worries and our eyes staring at screens for . . . well . . . every bloody minute of the day make it difficult to wind down, drift into a peaceful sleep, and stay in it until the alarm goes off.

There are sleep therapists, drugs, and apps to help, but my advice is much, much cheaper and less addictive.

There are many things I'm willing to compromise and/or give up: vegetables, overtime, making my bed, but I will not deprive myself of sleep.  No matter what, I will get my 7-9 hours a night. Hell, I've hosted parties where I have gone to bed and left my guests to fend for themselves.

How do I do it? Well, I don't have kids, which I'll admit helps. Even without them, I do have a full-time and a part-time job, a commute, food to prepare, laundry to do, an apartment to clean, errands to run, and a desire to keep up some semblance of a social life.  Believe me, turning off my brain is no easy task. And I can stare at a screen as much as the next person. So, I developed a routine that guarantees a good night's rest. I've shared my approach with colleagues, friends and family, of which one told me I needed to blog about my recipe because she found it so effective.

First, and I know this suggestion will sound sacrilegious, make sure to filter out all the blue-light from your devices--phones, tablets, computers--at around 8 p.m. There are a lot of apps that allow you to set a timer so it happens automatically. Of course it detracts from the vividness of graphics, but it is those graphics that convince your brain to stay awake.

About and hour before I hope to be asleep, I turn my television I've seen many times and is formulaic and doesn't require require my full attention. The mere sound of the characters' voices, theme song or score acts as a signal to my brain it is time to disengage.  I am partial to Forensic Files, but if blood spatter analysis and mitochondria DNA doesn't lull you to sleep, then I suggest  Law and Order or NCIS.  I only watch shows involving murder, so my suggestions are limited. Again, the key is formulaic and repetitive. You don't necessarily want to sit and watch it, but more listen to it while you prepare for bed.

I shower at night, so the warm water relaxes me. I take my time drying off, apply a myriad of lotions to lift, tighten while also plumping aging parts of my face and then I slather lotion on the rest of me and hope for the best.  While waiting for one layer of lotion to sink in before slapper on another, I'll do some very easy stretching: touching my toes, raising my arms over my head and bending side to side, throw in a nice and easy sun-salutation or two. I am nowhere near breaking a sweat, but I am working out some tension, nice an easy.

Once you climb into bed, take a few minute to mentally put all your stresses away.  What I do is turn any taxing thought into a photo and then visualize myself putting that picture into a box. Once I've "put away" all my stress, I place a lid on the box and put it away (slide it under my bed, tuck into my closet, or throw it out my bedroom window). I might have to repeat this visualization a few times depending on what is going on in my life at the time.

For those of you who need sound to sleep, instead of leaving the television on, stream soothing music or nature sounds.  I play rain sounds throughout the night. If you must have the dialogue of a television show, wear a sleep mask so the light doesn't keep your brain stimulated (and yes, this happens even when eyes are closed).  Lisa used to leave Criminal Minds on all night until her boyfriend told her the sound of screaming women being murdered was interrupting his REM cycle.  As much as I would like Derek Morgan in my bedroom, no matter what form, he will keep me awake.

Many don't have the luxury of fitting in an hour's worth of sleep-prep, so these steps can definitely be moved through more quickly.

Now, go the fuck to sleep.
Brilliantly composed by Writer at 7:03 PM

It's time to officially create a series title for the anecdotes that focus on my dumb moments.

I know, it's a long time coming.

To paraphrase one of my best friends: you might be the smartest person I know, but man can you be stupid sometimes. And trust me, it ain't the absent-minded-professor forgetfulness I suffer from. It's more like village idiot syndrome.

It's life's way of keeping my ego from swallowing the world around me.

I have never called my students stupid.
Okay, maybe I have once or twice. But never to their faces.
So, of all the series titles I could come up with for teaching anecdotes, why did I choose: "To Quote My Grandmother: Why Are Teenagers So Stupid?"
One morning a few years, my 91 year-old grandmother sat in my living room watching a morning news program while waiting for me to finish packing for a family trip to Scotland. The particular show featured a performance from Ke$sha. When I noted the horrified expression on my grandmother's face while she watched this young lady with pink hair, a fluorescent spandex bodysuit bouncing around the stage, I told her that, "She's popular with teenagers right now."
Her response: "Why are teenagers so stupid?"

Awarded by Born Bookish and Author in Training